Y is For Yorkshire Ancestors 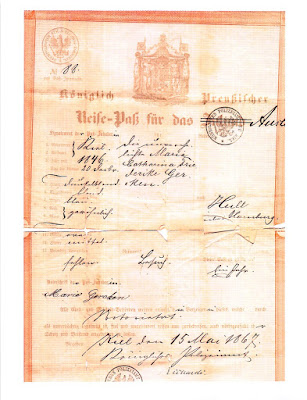 Olive Tree Genealogy is continuing a new Alphabet Genealogy series
of blog posts. I’m not following the usual way of going A-Z surnames.
Instead I will create a one word “tag”. Then I will share an ancestor (mine, my husband’s, an
inlaw’s or one of my children’s) who fits the tag

Today’s letter is Y for Yorkshire

My youngest son has Yorkshire ancestors through his father’s Schulze lineage. I don’t have any that I know of (yet).

Henry Schulze emigrated to Yorkshire England circa 1868. We do not know if he was married when he arrived, or married later in England, but no marriage has been found in England. His wife’s name was Marie (Mary) Catharina Friederke Gercken and she had been issued travel documents in 1867 as a single woman. Her immigration record has not been found.

For more details on the Schulze family in England, and the Schulze lineage in Germany, please see my book

Georg Heinrich Christian (Henry) Schulze, a skilled cabinet maker, left
Germany for Yorkshire England between 1867 and 1868. He and his wife
Marie Catharina Friederke (Mary) Gercken settled in Bradford where their
ten children were born.