The Story of the Orphan Elsie Markham 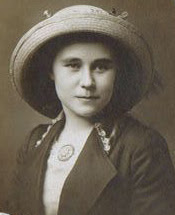 My husband’s great-grandmother Elsie Phyllis Markham was orphaned at the age of 8 months. Her older brothers ages 8 and 2 years old were also orphaned when their parents succumbed to illness in London England in October and November 1898.

The boys were sent to orphanages but Elsie was taken in by relatives, eventually brought to Canada by her brother Albert Finch who had been sent to Canada as a Barnardo Boy in 1901.

Read Albert’s story at O is for Orphans

The story of 8 month old Elsie

According to Elsie’s son Bert, Elsie was an orphan. Her parents Albert and Edith were said to have died in an epidemic in England ca 1900. Elsie was sent to an orphanage then out to work for a Jewish lady, then her brother sent for her to come to Canada. Elsie had 2 brothers – Albert Finch and Frederick Markham.

Intrigued by the family lore I decided to research Elsie and find out what happened to her.

In February 1899 Elsie was with her paternal aunt and uncle, Frederick and Maria Markham in London England. Her brother Frederick Markham was in Millers Orphanage in Bristol, and her brother Albert Finch was in Barnardos Homes.

Her aunt and uncle gave Elsie up sometime between 1899 and 1901.  Records reveal that her uncle was growing tired of the extra expense caring for her.

1901 found 3 year old Elsie living with the MacGregor family. It appears they took her in as a foster child.

I do not know how long Elsie was with the MacGregor family but in 1913 at the age of 15 she was on her way to Canada, thanks to her older brother Albert. Albert, how I wrote about previously  at O is for Orphans  had saved his merger earnings as a Barnardo Home Child sent to Ontario Canada and paid for Elsie’s passage to join him in St. Mary’s.

Elsie sailed on the Royal George, arriving in Quebec in September 1913 and was soon on her way to her new home. Four years later Elsie married a hard-working farmer Bristol Holden. She was already pregnant with a son (my husband’s grandfather) by Bristol’s hired man George Cooper, but whether or not Bristol knew the child was not his, is not known. She and Bristol had a happy marriage, and Elsie bore 5 more children.

She lived until the age of 94, dying in St. Mary’s in 1993. Her husband Bristol had died almost 30 years previously and she never remarried.

All three children who were orphaned at such young ages, reconnected in Canada. Little Frederick’s story will be next, and I  must warn readers it is not a happy ending story.