The genealogical overburden of duplicate work

The definition of "overburden" that I am using here refers to the "rock or soil overlying a mineral deposit, archaeological site, or other underground feature." Google Dictionary. In doing genealogical research it is necessary to remove the "overburden" of duplicate entries, previously inaccurately done research, and other detritus before we can actually make some progress. Here is an example of the overburden from a recent FamilySearch Family Tree search. 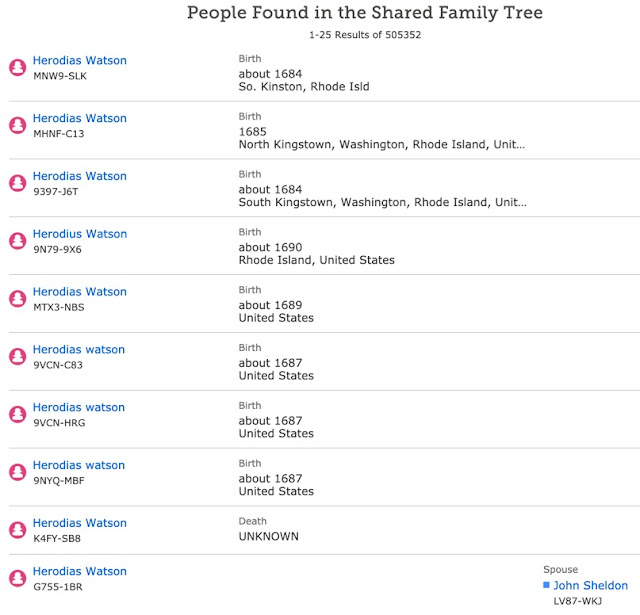 All of these entries for "Herodias Watson" are the same person and none of them showed up as duplicates until I started merging the duplicates down through this list. But the issue of overburden is much deeper than just an afternoon spent merging duplicates and correcting inaccurate entries in a family tree. I am acutely aware of the huge overburden that I began to remove almost 40 years ago. I spent the first 15 or so years of my involvement in genealogical research merely wading through all the paper that had been accumulated by members of my family over the previous 100+ years. This long list of nearly identical entries above is only a microscopically small indication of the number of similar entries I have had to endure to get to a few genealogical gems.

One ancestral line back about six or so generations is the Sheldon line beginning with my 5th Great-grandmother, Elizabeth Sheldon, b. 1713, d. 1801. This family is mainly from Rhode Island as were those in my Tanner surname line. The problem with both the Tanner surname and the Sheldon surname is that these are fairly common names and both families names all their children with the same names. A quick look on Findmypast.com shows that this website has almost 800,000 records for the Tanner surname and almost 500,000 for the Sheldon surname. One important fact about both these names is that people with these surnames are not necessarily related. When you get back to Rhode Island in the 1600s, commentators on the family’s genealogy acknowledge that there are two original Sheldons named John who are not related. They are referred to as the "John Sheldon of Providence" and the "John Sheldon of Kings Towne." There are also people named John Sheldon at the time living in Connecticut and Massachusetts. The confusion in the Family Tree is so complete as to boggle the mind of the most persistent researcher.

When someone with less experience starts to work in these "messy" areas of their family tree, it is almost inevitable that they become confused, especially when there are "sources" supporting the entries when the real historical person was misidentified. One simple example from my own lines was my direct line ancestor, William Tanner, b. about 1688 probably in England but possibly in Rhode Island. People kept adding a parish record from England for a "William Tanner" born about the same time but at that time there were over 1,700 William Tanners listed in the records of Findmypast.com and there were no records connecting any of the William Tanners in England. Why would someone doubt the entry when there was a parish record to support the christening. What is even harder to detect is the fact that this particular "William Tanner" was only one of approximately a dozen men with that name during the time period when Francis Tanner, the documented end-of-line person was born.

Although a tremendous amount of work has gone into some of these lines, the information is usually contradictory and unsupported. I believe that the main issue with online family trees is this massive duplication of effort that has occurred. The FamilySearch.org Family Tree and a few other consolidated family tree websites such as WikiTree.com and Geni.com, have created a mechanism where this overburden can eventually be eliminated but in many cases all that has been acheived is to graphically illustrate the problem. For example, the problem I mentioned about John Sheldon in Rhode Island from the FamilySearch Family Tree is duplicated in WikiTree.com and in Geni.com likely because the information came from the same faulty original sources.

Now when I go back to my early years of genealogical research, I now realize that I "fell" for many of these overburden traps since my original research was based on Family Group Records that were submitted over a period of about 100 years to the Genealogical Society of Utah, now FamilySearch. One of the biggest problems is the failure of many genealogists to even recognize that this huge overburder of duplicate and inaccurate records even exists.

Meanwhile, I have plenty of work to do. It is obvious just from this last week’s work that I have yet barely scratched the surface of the problems that exist on my direct line ancestors in the online collaborative family trees.