It is not all in the name: the challenge of naming practices and traditions 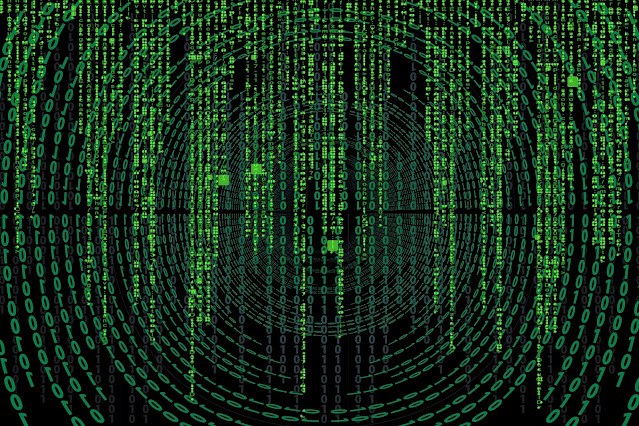 The traditional Western European genealogical representation of a person’s name is adequately illustrated by this example from the FamilySearch.org website. 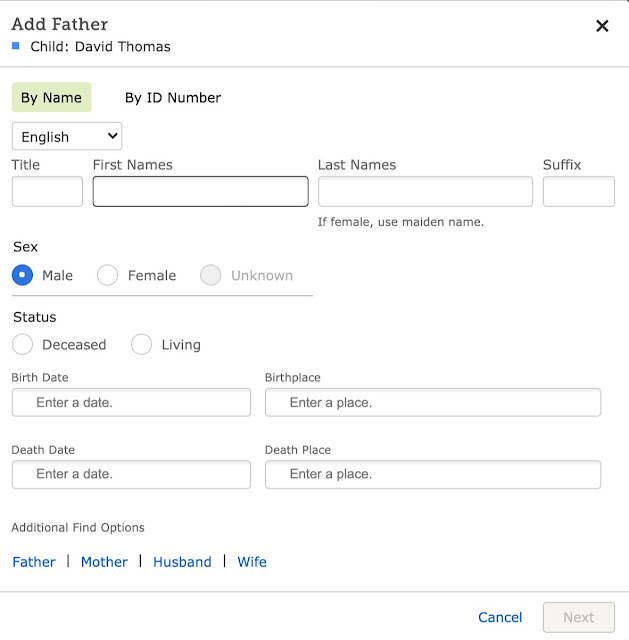 Here is an example of a name from the Netherlands in the 18th century as recorded in the FamilySearch.org website: Isaac Eizik Marcus Mordechai de Vries. What is not recorded is the fact that most Jews did not have family names in the Netherlands before 1811. See "Jewish Genealogical research in the Netherlands, Compiled by Reinier Bobbe z”l, Jan Sanberg, Ury Link, Moshe Mossel and Ben Noach." What would appear to be a surname, "de Vries," is simply a designation of the family’s origin. "De Vries" as explained in a Wikipedia article has the following meaning:

De Vries is one of the most common Dutch surnames. It indicates a geographical origin: "Vriesland" is an old spelling of the Dutch province of Friesland (Frisia). Hence, "de Vries" means "the Frisian". The name has been modified to "DeVries", "deVries", or "Devries" in other countries.
Variant form(s): DeVries, Devries, Vries
Language(s): Dutch
Region of origin: Netherlands
Meaning: The Frisian

Additional spellings of the name also include DeFries, DeFriez, and De Friez. Some of these variations are recorded for members of the same family. Again quoting from the article above on Jewish research,

A Jewish male child is traditionally named after his grandfather, apart from a few exceptions, so from the name “XXXX son of YYYY” the names of both grandfather (XXXX) and father (YYYY) can usually be deduced.

A Jewish female child is likewise named after her grandmother, and the same rules apply.

In the text on gravestones the name of the mother is usually mentioned as well (“XXXX born from ZZZZ” or: “the name of his/her mother is ZZZZ”). Posthumous children on the other hand are named after the father who recently passed away.

Among Sephardim, as is customary among non-Jews, children are often named after the father while he is still alive.

While civil names do not often give a good indication for establishing family relationships, the Hebrew names often give more support for the reconstruction of family ties, taking regional distinctions into account.

Please refer to the article for additional important details regarding the naming practices.
It is extremely important to genealogical research to note that the name entry form at the beginning of this post makes no allowances for any of the important information concerning the names in the examples I have given so far. Another important statement from the article is that civil names do not often give a good indication for establishing family relationships.
If you had Jewish ancestors in the Netherlands in the 18th Century and before, how would you enter the names of your ancestors in order to avoid losing all the information that could be contained in the names themselves?
In this post, I am focusing on Western European names. But as an aside, I might mention Shoshone or Shoshoni naming practices used well into the 19th Century. Here is one example of an academic article on Shoshoni naming practices.
Chamberlin, Ralph V. 1913. Place and Personal Names of the Gosiute Indians of Utah. Proceedings of the American Philosophical Society 52,208.1-20. See also Shoshoni Dictionary.

Here is a quote from the article from the section where individual names are discussed.

Among the Gosiute many personal names are given in reference to some feature of the physical appearance. Thus, a boy with conspicuous ears that stand out from the head is named K?m’o-r?p, meaning, in effect, " Rabbit ears " or " he with rabbit ears." Another young man who has a spinal curvature is called in full ‘ I’ca-gwaim-no-dsup, " Person whose back appears broken " ; a girl with a considerable growth of hair on her upper lip goes under the name M?’ts?mp, from mo’tsu, muts, meaning moustache; a boy who is tall is Nan’nan-tci, from mchna’hna, to grow up, grow up high, and a tall woman is similarly called Na’ See Stable URL: https://www.jstor.org/stable/983995

Are these given names or surnames. In any event, they do not covey any form of family relationship and should not be considered to be surnames.

The Spanish language is variously ranked as the second or third most spoken language in the world. See "Top 10 Languages By Number Of Native Speakers" for an example.  Spanish language names constitute a major challenge to the most commonly genealogically represented naming patterns illustrated by the FamilySearch example above. Here is a quote from a long article entitled, "Naming Conventions of Spanish-Speaking Cultures, Understanding Spanish Family Names & Given Names."

Understanding the naming conventions of ancestors of Spanish descent is extremely important for two primary reasons. (1) Spanish speaking ancestors often had two surnames (when not more), and (2) a cursory look at a Spanish census may seem to indicate that all of the local residents shared two given names: Jose and Maria. If we fail to understand the naming conventions of the Spanish-speaking cultures of our ancestors, we have confusion on both fronts, surnames and given names.

Here is a brief quote from this same article that begins the explanation of Spanish language naming patterns.

To illustrate, a father named Pablo Guerra Recio, married to Refugia Alfrido Garcia, may wish to name their son Pablo, after himself. Their son’s name will then be: Pablo Guerra Alfrido.

As you can see, "middle" names are not middle names as we know them in English-speaking cultures, but are, instead, a surname derived from the parents’ surnames. (In fact, the two surnames of the child are those of his paternal grandfather and his maternal grandfather, in that order.)

Of course, there are exceptions to this rule. Now think about this, if an English speaking person from the United States who had no knowledge of any of the above naming practices was to be asked to index or enter any one of the names from these three examples what are the chances that the name would be entered correctly and further, what is the chance that all the additional information about the name and the naming practices would be lost?

Additionally, in the case of Shoshoni names, which method of phonetic representation would be appropriately used? If you don’t understand this question, then this is yet another issue in indexing and entering names.

I have had this topic on a list on a note on my desk for some time now. But it moved to the top for a variety of reasons including the fact that I have been providing support to the Brigham Young University Family History Library and the Salt Lake City Family History Library for the past few months helping with online patron support. See Family History Library in Salt Lake City. My support has been, almost exclusively conducted in Spanish, concerning ancestral lines in Italy, Spain, and Latin America. Since the entry form for English speakers is not helpful for Spanish speakers, FamilySearch has made available a Spanish language version of the website. Here is the same form from the Spanish version. 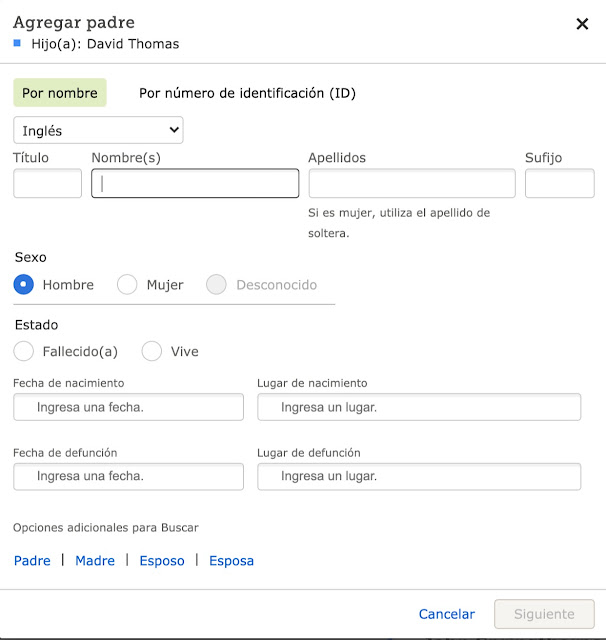 This is simply a translation from the English form with two small differences; the surname designation is plural rather than singular and there is a statement that says, "If the person is a woman, use her maiden name." This implies that only the woman’s maiden name should be used but there is only one blank space when there are usually two surnames.

It is also important to note that not all the Spanish-speaking countries adhere to this traditional naming pattern to the same extent.

I will have a lot more to say on this subject. The main question is when will the dominant Western European genealogical forms begin to reflect the fact that even Western European naming patterns do not conform to a standard two-part entry system?