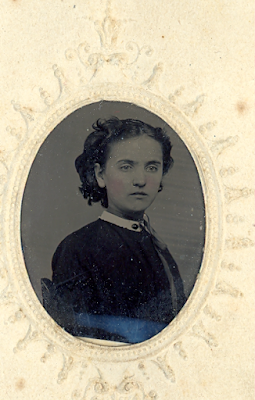 Genealogists
often have old family photos in their possession or they find some in
Great Aunt Matilda’s attic. But how do we know when the photograph was
taken? One method is to determine what type of photograph it is.

Photography
arrived in the United States in 1839 thanks to Samuel F. B. Morse, an
American artist and inventor.The
earliest type is the Daguerreotype. Ambrotypes followed, coming into use
circa 1854. By 1855 Tinytypes had begun to replace Ambrotypes

The Ferrotype process (tintypes) was introduced in the United States in
1855. It substituted an iron plate for glass and was even cheaper than
the ambrotype. Because tintypes were placed in albums along with CDVs,
they were often trimmed at the sides and corners.

Tintypes were
produced in various sizes

Watch my video on