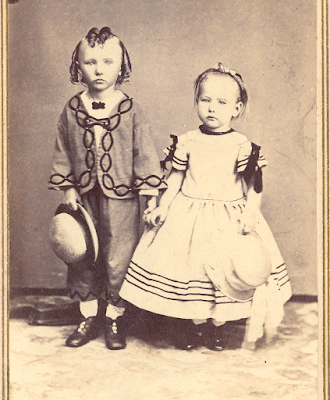 Genealogists
often have old family photos in their possession or they find some in
Great Aunt Matilda’s attic. But how do we know when the photograph was
taken? One method is to determine what type of photograph it is

Photography arrived in the United States in 1839 thanks to Samuel F. B.
Morse, an American artist and inventor. The
earliest type is the Daguerreotype. Ambrotypes followed, coming into use
circa 1854. By 1860 Cartes de Visite (CDVs) were becoming popular.

Cartes de Visite are photographs
mounted on a small (4×2.5″) cardboard card. They became extremely
popular as a method of collecting photographs of friends and family
members to place in elaborate albums. A CDV could be easily duplicated
in contrast to the earlier daguerreotypes and ambrotypes.

Estimating Dates of a CDV

Early 1860s CDVs have square corners.
By 1870 many had rounded corners. The thinner the cardboard backing,
the earlier the Cartes de Visite. Photographers logos, found on the
verso (back) of the CDV also began to change, becoming more elaborate in
later years.

1872 CDV with round corners

Watch my video on