For Mother’s Day, I thought I would post something about my mother’s ancestry, and about my mitochondrial DNA which I received from her.

Here is a favorite photograph of my mother, with her mother, and her mother’s mother: 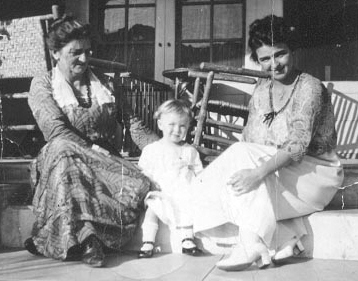 This is the only three generation photograph I have of my mother’s matrilineal line.

My (and my brothers’) matrilineal line is:

a) Randall J. Seaver
b) Mother Betty Virginia Carringer (1919 San Diego CA – 2002 San Diego CA) married Frederick W. Seaver.  They had 3 sons, no daughters, so we are at the end of our mitochondrial twig.

d) Great-grandmother Georgianna Kemp (1868 Norfolk County, ON – 1952 San Diego CA) married Charles Auble.  They had only one child, my grandmother.

e) 2nd great-grandmother Mary Jane Sovereen (1840 Norfolk Co ON – 1874 Norfolk Co ON) married James Abram Kemp.  They had 3 daughters and one son who had children.  There are probably K1b2b carriers from the other daughters.

f) 3rd great-grandmother Eliza Putman (1820 Steuben Co NY – 1895 Norfolk Co ON) married Alexander Sovereen.  They had 14 children, but only 5 daughters and two sons married and had children.  There are probably K1b2b carriers from the other daughters.

g) 4th great-grandmother Sarah Martin (1792 Middlesex Co NJ – 1860 Norfolk Co ON) married John Putman.  They had 3 daughters and two sons, so there are probably K1b2b carriers from the other daughters.

h) 5th great-grandmother Betsey Rolfe (1766 Middlesex Co NJ – ????) married Mulford Martin.  They had 2 daughters and two sons that had children, so there may be K1b2b carriers.
i) 6th great-grandmother Sarah Campbell (1746 NJ? -1838 Tompkins Co NY) married Ephraim Rolfe.  They had 5 daughters and three sons that had children, do there may be K1b2b carriers.

j) 7th great-grandmother FNU LNU married Robert Campbell (?).  I don’t know dear FNU’s name but surpmise she was born in Scotland or Ireland.  I don’t know how many children she had besides Sarah.

Are there any cousins reading this who have these same ancestors of mine?  I would love to hear from you.