This is my 48th Father’s Day!  Here are some great quotes about Fathers: 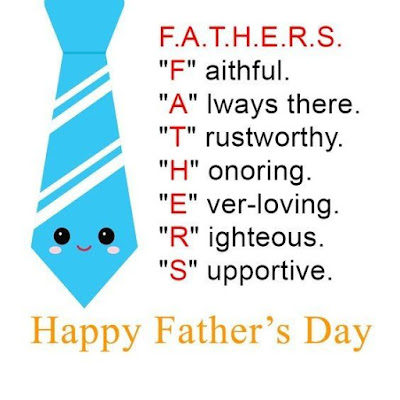 It is much easier to become a father than to be one. ~Kent Nerburn

When I was a boy of fourteen, my father was so ignorant I could hardly stand to have the old man around. But when I got to be twenty-one, I was astonished at how much he had learned in seven years. ~Mark Twain

Father! – to God himself we cannot give a holier name. ~William Wordsworth

My father gave me the greatest gift anyone could give another person: he believed in me. ~Jim Valvano

What a father says to his children is not heard by the world, but it will be heard for posterity. ~ Jean Paul Richter

Father taught us that opportunity and responsibility go hand in hand. I think we all act on that principle; on the basic human impulse that makes a man want to make the best of what’s in him and what’s been given him. ~Laurence Rockefeller

One father is worth more than a hundred schoolmasters. ~George Herbert

My father didn’t tell me how to live; he lived, and let me watch him do it. ~Clarence Budington Kelland

I cannot think of any need in childhood as strong as the need for a father’s protection. ~Sigmund Freud

My father always told me, “Find a job you love and you’ll never have to work a day in your life.” ~Jim Fox

If the new American father feels bewildered and even defeated, let him take comfort from the fact that whatever he does in any fathering situation has a fifty percent chance of being right. ~Bill Cosby

A man’s worth is measured by how he parents his children. What he gives them, what he keeps away from them, the lessons he teaches and the lessons he allows them to learn on their own. ~Lisa Rogers

It is easy for a father to have children than for children to have a real father. ~Pope John XXIII

Being a great father is like shaving. No matter how good you shaved today, you have to do it again tomorrow. ~Reed Markham

That is the thankless position of the father in the family-the provider for all, and the enemy of all. ~August Strindberg

The fundamental defect of fathers is that they want their children to be a credit to them. ~Bertrand Russell

The older I get, the smarter my father seems to get. ~Tim Russert

It is a wise father that knows his own child. ~William Shakespeare

A father is always making his baby into a little woman. And when she is a woman he turns her back again. ~Enid Bagnold

Why are men reluctant to become fathers? They aren’t through being children. ~Cindy Garner

By the time a man realizes that maybe his father was right, he usually has a son who thinks he’s wrong. ~Charles Wadsworth

Every dad, if he takes time out of his busy life to reflect upon his fatherhood, can learn ways to become an even better dad. ~Jack Baker

Fatherhood is pretending the present you love most is soap-on-a-rope. ~Bill Cosby

The father is always a Republican toward his son, and his mother’s always a Democrat.” ~Robert Frost

The father of a daughter is nothing but a high-class hostage. A father turns a stony face to his sons, berates them, shakes his antlers, paws the ground, snorts, runs them off into the underbrush, but when his daughter puts her arm over his shoulder and says, ‘Daddy, I need to ask you something,’ he is a pat of butter in a hot frying pan. ~Garrison Keillor

Life was a lot simpler when what we honored was father and mother rather than all major credit cards. ~Robert Orben

It is not flesh and blood but the heart which makes us fathers and sons. ~Johann Schiller

It doesn’t matter who my father was; it matters who I remember he was. ~Anne Sexton

A father is a man who expects his son to be as good a man as he meant to be. ~Frank A. Clark

The most important thing a father can do for his children is to love their mother. ~Rev. Theodore Hesburgh

Love and fear. Everything the father of a family says must inspire one or the other. ~Joseph Joubert

Old as she was, she still missed her daddy sometimes. ~Gloria Naylor

At a time of reproductive freedom for women, fatherhood must be more than a matter of DNA. A man must choose to be a father in the same way that a woman chooses to be a mother. ~Mel Feit

A man knows he is growing old because he begins to look like his father. ~Gabriel Garcia Marquez

To support mother and father, to cherish wife and children, and to have a simple livelihood; this is the greatest blessing. ~Buddha

Aren’t those great quotes? Thank you to Maddie Ruud, who wrote Meaningful Quotes for Fathers & Fatherhood, for the list.

Here are four of mine:

A father’s job is to give his children Roots and Wings. I’m trying!   ~ Randy Seaver

A father’s Bank of Dad is always open, but it’s usually wisdom, advice, and approval, and not money. ~ Randy Seaver