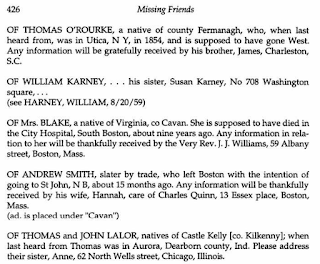 The Missing Friends Project on
OliveTreeGenealogy.com is extracting the names of those who immigrated
from UK to America or Canada and who were inquired about by family in
various 19th Century newspapers.

Missing Friends Project starts with Lloyd’s Weekly Newspaper,
published in London England and their weekly column (1886-1900) called
“Long Lost Relatives”. We also have begun extracting names of those in
the Boston Pilot, published in Boston Massachusetts (1831-1921).

Our Boston Pilot project is only extracting the names of
missing Irish individuals who sailed to Canada. It is important to note
that many who sailed first to Canada went on to USA and are so noted in
the extracts. Many of the relatives and friends seeking them were based
in USA and their location is also given.

We also plan to publish extracts of weekly columns of Missing
Friends from The Irish World (1892-1899), published in New York and The
Manchester Weekly Times (1891-1893) published in England. We will add
other newspapers as we find them and can access them.

There are  links and databases at Missing Friends