is to move online for the first time in 2020. The announcement came as the festival was officially launched at the Edward Worth Library in Dublin 8 by the Lord Mayor of Dublin, Hazel Chu. The festival, an initiative of Dublin City Council, will take place from Friday 11 September to Sunday 4 October, with all events free to attend. 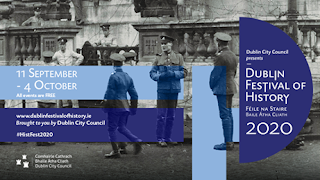 The festival, which is organised by Dublin City Libraries and is now in its eighth year, will take place largely online as a result of the Covid-19 pandemic, but will still play host to an international and domestic line up of speakers and panels.

Subjects covered will be as broad as ever and will include Irish and international historical topics.

In addition to online talks, there will be a number of socially-distanced walking tours of historical locations including St. Anne’s Park, Raheny, Croke Park, and Richmond Barracks, Inchicore.

Some of the highlights from the 2020 programme:

Speaking at today’s launch, Dublin City Librarian Mairead Owens said: “This year marks a huge departure for the festival. We have always prioritised the ‘in person’ experience of attendees at the festival, bringing people together to hear stories from our shared and diverse history. This year, however, for reasons that we all know only too well, we are moving online. This also presents a whole new opportunity for the festival, opening it up to people across Ireland and the world.

“Previously, people from around Ireland might have had to travel to Dublin for one day, or two. Now they can join the festival from the comfort of their own home, for as many events as they wish. Our own home-grown historians can also share their incredible historical research with people from anywhere in the world. It’s a very exciting time for the festival and we look forward to sharing what we have created here with communities beyond our traditional reach.”

The full programme of events will be published on the Festival’s website in the coming weeks.