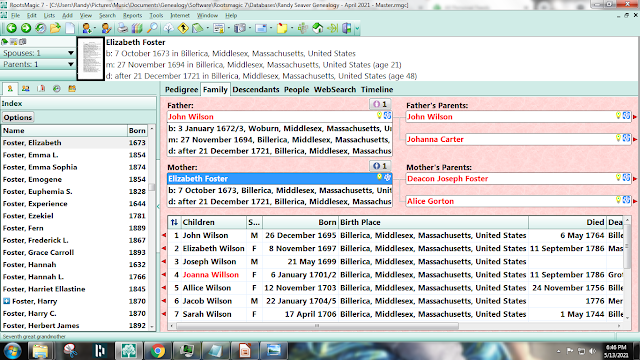 "Thirdly  I give to my daughter Elizabeth Willson the homestead that I had of Doctor John Kittrige whar Thomas Foster now lives and I do further give unto her my Nuttings meadow with all the land that I have upon Beare hill all on the wast side of the country road this I give unto her and to her hairs forever."

He also bequeathed property to his granddaughter, Joanna Willson:

""Fifthly  I give unto my granddaughter Johannah Willson twenty pounds to be paid to her by my executors in a cow and a bed and the rast in money.  I also give her a platter and a grat bason and a little bason and two spoons and my bias skillet and the chest that she lays her clothes in and a lining wheel and six wooden plates and a chaire. These I give to her and her hairs forever.  This money that is to be paid to Johannah above what her bed and cow comes to shall be paid out of ye movables or else they may be sold for money to make it:  and all the rest of my movables both within doors and without both cattle and all other things both wood and iron without doors and bras and pewter within doors and all other movables except that I have given to Joseph Willson and Johannah Willson they shall be equally divided between my son Thomas Foster and my daughter Elizabeth Willson and in cas they cannot agree in thar divission I do appoint my trusty friends Bengemen Thompson and John Blanchord to make thar divission for them and if they cannot agree I appoint Mr. Joseph Stevens to joyn with them and to make a final ishew."